Introducing RonaScreed SBR
Coronavirus Update
Book your place on our next resin bound product awareness training
Want some free resin surfacing samples? Order some today!
Want to learn more about concrete repair, screeds or SuDS? Book one of our CPD’s.
View our NBS plus product listing 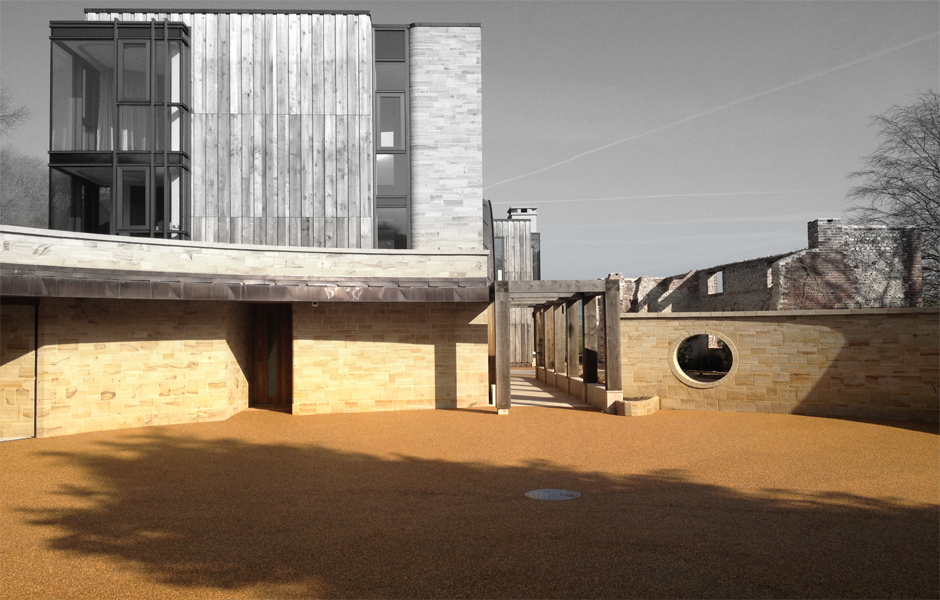 The property owner employed BPR Architects to design Downley House as his family home.  Downley House was built on the site of old farm buildings set within the newly formed South Downs National Park. Part of the original house has been retained as a folly adjacent to the main house. The building incorporates a family wing and a guest wing linked by a barrel vaulted dining hall over the entrance to the original property, the barrel vaulted roof is just one of a number of barrel themes to be seen in the design, partly a reference to the owner’s history in the wine business. Other interesting features are a copper roof and glass surround spiral staircase leading to a roof terrace. Work began on the development in the summer of 2010 and the project finally reached completion in spring 2012.

Ronacrete Approved Contractor PRC Landscapes was employed to carry out  groundworks and landscaping on the 3 acre site, including application of RonaDeck Resin Bound Surfacing.

The SuDS compliant two-part aggregate system was applied to 650 square metres of a suitable macadam substrate including patios, the driveway and turning circle.  The aggregate selected was Harvest Crunch, a blend of naturally coloured aggregates in keeping with the house surroundings. The aggregate colour will not change over time because the elastic polyurethane resin does not degrade when exposed to Ultra Violet light.

The RonaDeck Resin Bound Surfacing System was supplied in two components which were mixed together with a drill and paddle before being added to the aggregate blend. The aggregate and resin were then mixed in a high capacity forced action mixer. The mixed material was poured onto the substrate, spread to level and trowel finished at a thickness of 15mm.   After completion the paving was ready for foot traffic within four hours and ready for vehicles after 1-2 days.